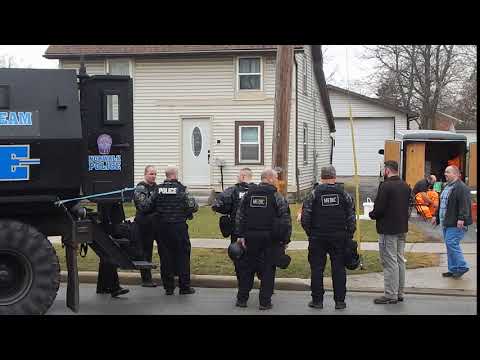 A co-defendant in the recent Cline Street methamphetamine drug raid was indicted earlier this month on charges accusing him of threatening someone involved in the case.

Brandon W. Henderson, 34, most recently of 16 Minard Place, was charged with intimidation of an attorney, victim or witness in a criminal case in connection with a Feb. 24 incident. If convicted of the third-degree felony, he faces nine months to three years in prison.

The morning after posting a $40,000 bond in the meth case, Henderson is accused of threatening “a potential witness in the case,” Norwalk Police Detective Sgt. Jim Fulton said earlier.

Shortly after Henderson’s arrest, Fulton had said he wanted to secure a search warrant to access the phone so he could retrieve the messages that Henderson reportedly sent.

Henderson turned himself into police Feb. 17, two days after authorities issued a warrant for his arrest. He then spent about six days in the Huron County Jail. Officers were looking for Henderson after the special response team used a search warrant the morning of Feb. 15 at a suspected meth lab on Cline Street. The drug raid closed Cline from League to Fruen streets.

While on Cline Street, authorities said they placed two children, ages 7 and 13, in the temporary custody of other relatives.

On Feb. 23, Henderson’s case was transferred from Norwalk Municipal Court to Huron County Common Pleas Court for a possible indictment while court records indicate Bryan’s case is being reviewed by Huron County prosecutors.